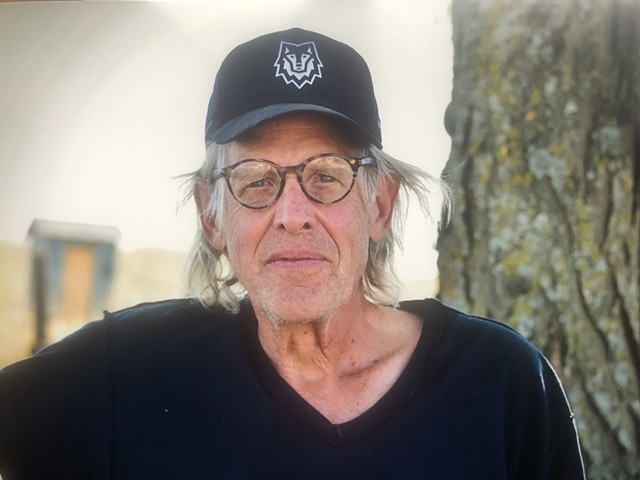 I am a sculptor and naturalist living in Matfield Green, in the heart of the Flint Hills of Kansas.

I work with natural and man-made materials found in the tall grass prairie. My sculpture expresses my cosmological view that humans, nature, and everyday objects evolve as equals from creative energy of an ever changing universe.

I was born in Lima, Ohio and as a child developed a deep connection to nature exploring the fields and streams of northeastern Indiana, collecting finds, pondering their beauty, and making things.

Yet, expectations and training led to professional life as an architect rather that a sculptor or naturalist. I attended Harvard College (BA,1970), Harvard Graduate School of Design (MArch.1975), and was a Harvard University Sheldon Fellow in 1976.

In 1980 I established an architectural firm in Chicago and for twenty-five years enjoyed designing churches, commercial buildings, schools, private homes, and urban design and historic renovation projects. In these years sculpture was an avocation.

I won first place in the Chicago Institute of Architects' Art by Architects competition in 1989, participated in group shows and charity auctions. Most notably I created "Hey Diddle Diddle", the popular cow jumping over the moon at the Wrigley Building, for Chicago’s Cows on Parade in 1999.

I became a passionate environmentalist, prairie preservationist, and advocate for sustainable agriculture. I was a long-term board member of Friends of the Chicago River and co-founder of Riverbank Neighbors, a successful grassroots effort to restore native habitat and welcome people to the banks of the Chicago River.

While loving architecture, urban life, and the natural wonders of the Chicago River I began to dream of being a sculptor in the prairie. In 2005 my wife, Julia Fabris McBride, and I left Chicago for a new life in Matfield Green.

During the first years in Kansas full attention to sculpture was trumped by the demands of resettlement, house construction, a new child, and founding Pioneer Bluffs Foundation, a non-profit focusing on prairie heritage, community, and sustainability.

By 2010 these demands subsided and the dream of being a full-time sculptor was realized. Serendipitously, my life as a sculptor is enriched by like-minded artists and galleries in the growing Matfield Green arts community.

My work has shown at First Fridays in Wichita, the Strecker Nelson Gallery in Manhattan, Ks. and in Matfield Green’s contemporary art galleries at Pioneer Bluffs and The Bank. Upcoming shows include Symphony of the Flint Hills Gallery in Cottonwood Falls, Ks. and at the Cultivator Space in Chicago.